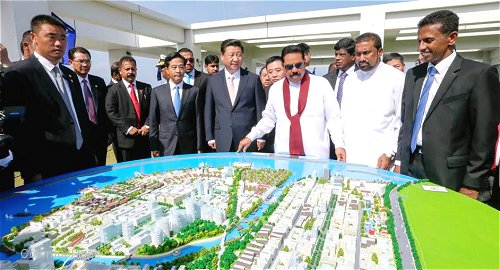 Chinese President Xi Jinping  launched the construction of a $1.4 billion port city in Sri Lanka’s capital that will give Beijing a firmer foothold in the Indian Ocean region. Xi wrapped up his two-day visit to Sri Lanka by visiting Colombo harbour to kick off building of the port city, before heading to neighbouring giant India.The new city, Sri Lanka’s largest single foreign investment, is being built alongside an already existing Chinese-built container terminal, the only mega port in South Asia.

As part of the deal with Sri Lanka, China will gain ownership of one third of the total 233 hectares (583 acres) of reclaimed land that the new port city will occupy.Sri Lanka is a midway point on one of the world’s busiest international shipping lanes that Beijing wants to secure as a maritime silk road of the 21st century. Colombo hopes the city, which will have a Formula One track and a luxury marina, will attract another $5 billion in foreign investment for property development.