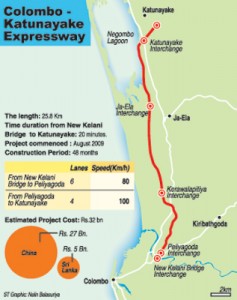 The Colombo – Katunayake Expressway (CKE) will be opened soon as more than 95 percent of the work on it has been completed, the Road Development Authority said. The Expressway which starts at the New Kelani Bridge leads to the Katunayake Aiport Road named as Canada Friendship Road, and it is being built to enable motorists to travel between the Airport and the City of Colombo within 20 minutes. According to the authorities, work on the New Kelaniya, Peliyagoda, Kerawalapitiya, Ja-Ela and Katunayake interchanges have been completed. ‘’The Kerawalapitiya Interchange is being built but it will not be opened until the Outer Circular Highway which connects to the CKE at Kerawalapitiya is completed’’, officials said. The 25.8km Expressway consists of 42 bridges and 102 culevrts. It has been built though the Muthurajawela marsh land, and borders the Negombo lagoon up to the airport. Authorities said compensation was paid for owners of 700houses, as their houses had to be demolished to make room for the Expressway. Sound barriers to reduce noise pollution, emergency telephones at evry 500 meters and a specialized canal system on either side of Expressway have been established.

Authorities said CCTV cameras were being installed along the road at the moment. Speaking to Daily Mirror earlier this year Project Director M.P.K.L Gunaratne stated that regulations established for the Southern Expressway would also be applicable to the CKE.

‘’Although this Expressway will be used by all, it is being built with foreign tourists in mind, therefore, the Expressway will have lights, plants and trees along the way to ideally help boost tourism in the country,’’ he said. ‘’ We give the environment the highest priority when we build this Expressway and we collaborate with several environmental organizations to ensure that it would be preserved,’’ Mr. Gunaratne said. He also recalled that even though the project had begun in 2000,it had to be stopped soon after as several obstacles cropped up.

‘’Work on the Expressway was then restarted with the assistance of the Chinese government. We hope to complete construction of the Expressway by the end of this month as more than 95% of the work has been completed up to now’’, Mr. Gunratne said.

This entry was posted in Sri Lanka. Bookmark the permalink.