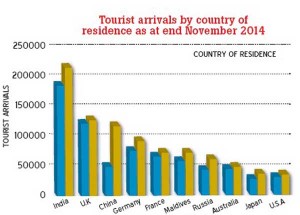 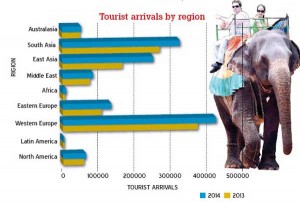 Tourist arrivals to Sri Lanka during the month of November rose 9.4 percent year-on-year (YoY) to 119,727 visitors while total arrivals for the first 11 months of the year stood at 1.34 million, up 20.3 percent YoY, the official tourism data showed. Sri Lanka targets 1.5 million tourists at the end of this year and 2.5 million by 2016. To achieve this year’s target Sri Lanka needs 151,519 tourists visiting the country in December. The highest number of tourists recorded for this year for a month was 146,575 in January.