Colombo-Kandy Expressway takes off on Friday 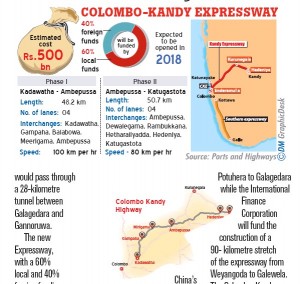 Information and Media Minister Keheliya Rambukwella said foundation stones would also be laid at Rambukkana, Galewela, Galagedara and Kurunegala on Friday. The expressway being built at an estimated cost of Rs.500 billion is expected to be opened in 2018.“We did not have much experience when building the Southern Expressway. But our engineers, technicians, surveyors and others involved in the construction of the Colombo–Katunayake Expressway and the extension of the Southern Expressway to Matara have since then gained vast experience in this field. The designing, planning and constructing of this expressway will be handled by our local engineers and contractors,” the minister said. He said the expressway would pass through a 28-kilometre tunnel between Galagedara and Gannoruwa.

The minister said there had been several proposals since the 1960s to construct the Colombo– Kandy Expressway but for one reason or another they ended up in the dustbin while the project set in motion during the presidency of former President Chandrika Kumaratunga stopped at the Kelani Bridge with the Government having to pay compensation to the contractor.

The Government has undertaken to pay compensation to the owners on the market value of properties that were acquired by the Road Development Authority (RDA) for the project.