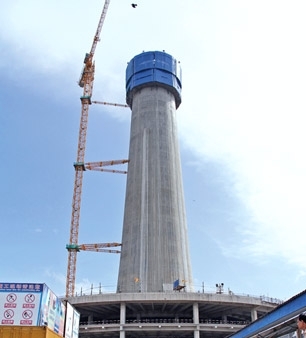 The Lotus Tower, that is being constructed down D.R. Wijewardena Mawatha would be completed in January 2016, and it would reach 190 metres by December this year, the Telecommunications Regulatory Commission (TRC) said.

The Director General of TRC, Anusha Palpita said that the tower had already reached a height of 120 metres.

He said about 20 – 25 metres was being constructed monthly on the tower to increase its height.

“Altogether there are ten elevators needed in the tower, and we have begun work of a few and we hope to complete the construction of two elevators within nine months,” he said.

The petals of the lotus flower atop the structure are to be completed before mid 2015.

The construction of the tower costs US $ 104 million, and eighty percent of the cost will be funded by the EXIM Bank of China. Once completed, the Lotus Tower will be the tallest building in Sri Lanka at a height of 350 metres.

Constructed on a 10-acre plot land, the tower would be one of the highest buildings in Colombo. Office spaces, malls and parking facilities are to be accommodated in the first few floors, while the upper floors are to be used specifically for telecommunication purposes.

Under the phase II, plans are being drawn to construct a theme park, shopping mall and a car park.