Kandy expressway to begin in January 2014 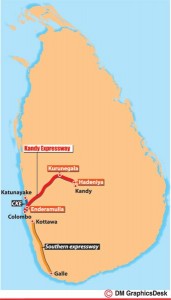 Under the first phase, the proposed expressway will be linked to the Colombo-Katunayake Expressway and will extend up to Kurunegala via Ederamulla and Meerigama, and then extended up to Katugastota in Kandy. The next phase will be the construction of the highway up to Dambulla.

Mr. Kotalawala, who is the Project Minister of Highways, told Daily Mirror that the expressway would be constructed in three stages under the concept ‘Build, Operate and Transfer (BOT) with financial assistance from China.

The minister said another expressway had been proposed between Bandaragama and Ratnapura while the stretch of the outer circular road up to Kaduwela would be commissioned in January.