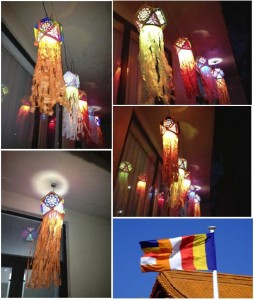 The commemoration of the Birth, Enlightenment and Passing Away of Lord Buddha in the season of Vesak was observed at Country Feeling Holidays. A series of religious ceremonies were held in Buddhist temples in the course of the Vesak week with blessings bestowed on the President and people of Sri Lanka.

The exact date each year varies according to the lunar calendars used in different traditions. This year we commemorated Vesak on 24thMay’13.Buddhists observe the occasion in a range of ways – meditation and prayer, observing precepts (no killing, no stealing, no lying, no sexual misconduct, no intoxicants, etc.), fasting, partaking of vegetarian food, giving to charity…….etc

Celebrating Vesak also means making special efforts to bring happiness to the unfortunate like the aged, the handicapped and the sick. While this day has been celebrated for many centuries in Asian cultures, it was only in 1950 that it was formally recognized at the first Conference of the World Fellowships of Buddhists held in Sri Lanka. Of added significance this year was the completion of 125 years of the Buddhist Flag which was first hoisted 125 years ago at Dipaduttaramaya, in Kotahena, Colombo by the Ven. Migettuwatte Gunananda Nayake Thera, to mark the first Vesak public holiday under the British rule. The Staff of Country Feeling Holidays participated in the religious observances.

This entry was posted in CFH. Bookmark the permalink.